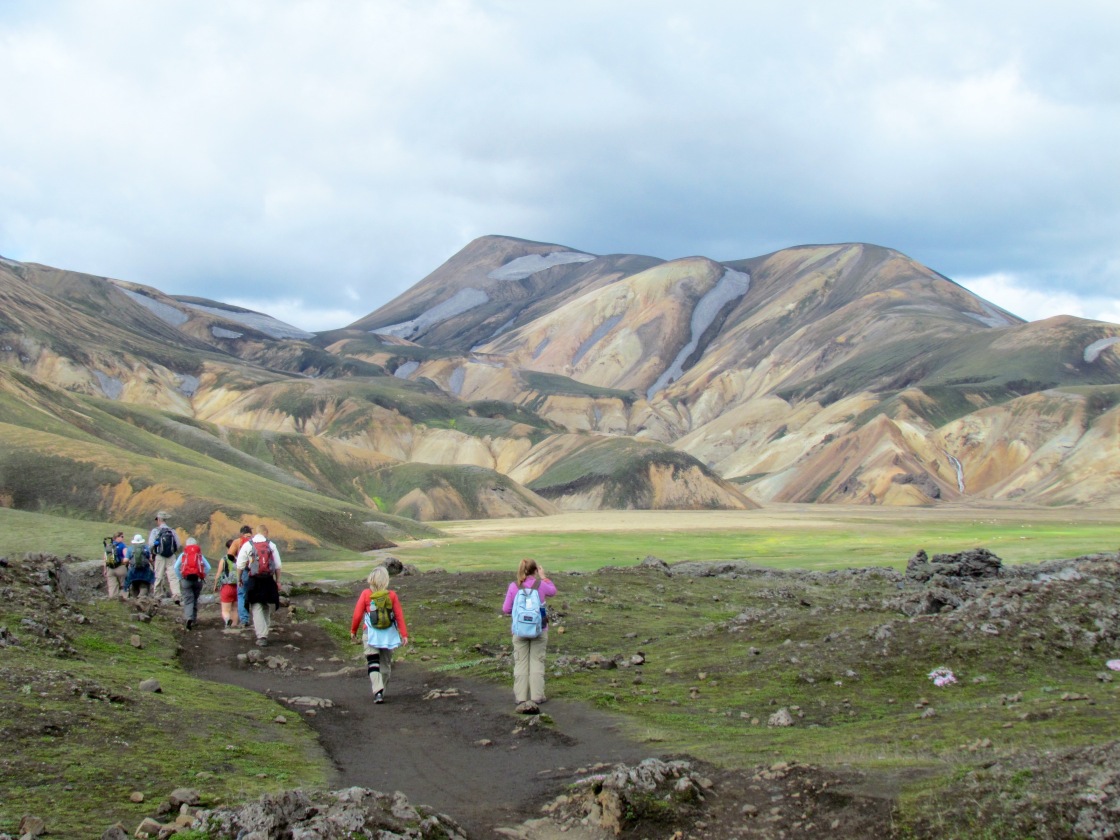 Hiking with Elves & Trolls in Iceland

Quietly, cautiously, I am making my way along the dark and windswept lava cliffs at the southernmost tip of Iceland. Not only am I concerned about the possibility of a 300-foot fall to the black sands below, I also don’t want to startle the puffins nesting amongst the sprinkling of wildflowers overlooking this foreboding seascape.

There are hundreds of them here today, clustered in groups, gazing out to sea, cocking their heads every few seconds as if considering something they’ve just heard.

The convex angle of their eyelids gives them a slightly worried look, reminding me of the other reason I’m treading gently: I don’t want to disturb, or annoy, the area’s other inhabitants – subterranean trolls.

There could hardly be two more dissimilar denizens of these shared rocks, but according the author of the gloriously illustrated book, Icelandic Trolls, puffins and trolls have long enjoyed an affectionate relationship.

“The sounds of puffins cooing and chattering echoes throughout the maze of troll caverns,” writes Brian Pilkington,”providing the most exquisite of music to a troll’s ears.”

With its 96 nature conservatories, Iceland is a hiker’s paradise and that is why a group of us have come – for the opportunity to spend nine days hiking through the Hobbit-infested, surreal landscapes that have long inspired musicians, storytellers and writers – J.R.R. Tolkien among them. Pilkington’s book in hand, I have an ulterior agenda – to catch a glimpse or trace of an Icelandic troll or some other fantastical creature.

In addition to trolls, there are also elves and Huldufólk – hidden people – living in Iceland.

“There is no doubt in my mind anymore, that there are two nations living in this country: the Icelandic nation and this invisible nation,” says Magnús H. Skarphéðinsson. 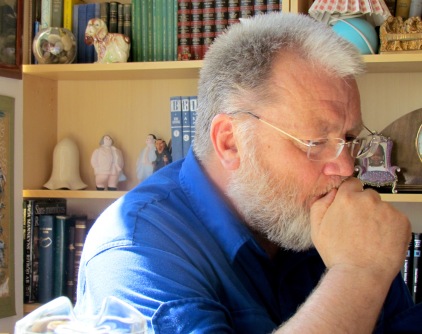 A former college history professor, Skarphéðinsson is now Headmaster of Álfaskólinn, or Elf School, a gnome- and troll-infested cluster of classrooms located on the east side of Iceland’s capital, Reykjavík. For thirty years, Skarphéðinsson has collected anecdotes from more than 700 Icelanders – a number he believes represents a small portion of the actual contact between humans and álfar (elves) and other hidden people.

“54% of Icelanders say they believe in the hidden people. Another 36% claim not to believe, but do notice them,” says Skarphéðinsson, who, with his kindly eyes, spectacles and graying beard, certainly looks the part of an elf authority.

Skarphéðinsson’s brother, Össur Skarphéðinsson, is Iceland’s former Minister for Foreign Affairs and External Trade. It’s intriguing to think that while one brother was lecturing on hidden people, the other was meeting with the likes of Angela Merkel and Barack Obama. But that’s part of the magic of Iceland.

Skarphéðinsson is not alone in his beliefs. The University of Iceland’s Department of Folkloristics maintains a database of 10,000 legends. And the Icelandic government has learned from experience public building projects must be diverted if there’s so much as a suggestion they may disturb an elf habitat, as projects end up costing two or three times their original budget if warnings go unheeded.

Iceland may also be the only country where an elected official will publicly comment on trolls and elves.

“I am one of many Icelanders that believe in elves and trolls,” stated Jon Gnarr several years ago in his first Mayor’s Address. Gnarr, a former punk rocker and standup comic, was elected Reykjavík’s mayor in 2010, representing, naturally, the Best Party.

“I mainly believe in Moomin elves,” he has said. “It is more of a certainty than a belief. I have seen them and touched them. I know they exist.”

That was encouragement enough for me: if the Mayor said elves and trolls were there, I wanted to find them.

Today’s only evidence so far, however, is a large and gloomy composition of rocks, rising ominously from the sea – all that’s left of a troll who was last seen hauling his ship towards the shore before being turned into stone by the rising sun.

When trolls carve out a new home for themselves, they clear debris from inside the mountain by dumping it out of the nearest opening, a cleaning activity that Pilkington says accounts for the many scree slopes around Iceland.

With that in mind, it’s now obvious that we are indeed in troll territory the afternoon we make our ascent up the last leg of Kristinartindar, which lies inside Skaftafell, Iceland’s second largest national park.

Kristinartindar (Kristin’s Peak) is a personal challenge for me due to the name we share. But more than that, its inhospitably jagged edges offer unique views of two huge glaciers – Morsárjökull and Skaftafellsjökull – both of which extend from Vatnajökull, the largest icecap in all of Europe.

Eighty percent of the hike is delightful. We trek up through lush trails pausing at Svartifoss (Black Falls), where water tumbles over an amphitheater of vertical dark basalt columns crystallized from the inside of a slow cooling lava flow, giving the impression of a giant’s set of organ pipes.

The final ascent, however, is an unmarked steep path through bleak fields of trolls’ scree and it becomes increasingly difficult to find anything to step on that doesn’t immediately fall away from under our boots. It’s like walking on marbles.

Eventually we scramble up to the jagged edges of the saddle and gaze, lost for words, at the icy expanse of glacier nearly four thousand feet below, and at Iceland’s highest point, Hvannadalshnúkur, as it plays peak-a-boo with us between passing clouds – a mesmerizing spin-art of grey, brown and white swirls set against a deep blue sky.

What a view! It’s no wonder the trolls have chosen to live here.

One of the byproducts of Iceland’s thousands of years of earthquakes and volcanic activity has been the creation of – according to Pilkington – a subterranean maze of interlinking tunnels and chambers – a most comfortable habitat for trolls where they can live quietly, far away from the sun and man’s curiosity.

Being in Iceland, though, the rock they live in is not always as peaceful as they would like it to be and there are times when trolls find themselves, as Pilkington notes, “faced with uncontrollable central heating problems” and forced to find a new place to live.

Knowing Hekla, Iceland’s most active volcano, has been rumbling ominously lately, I calculate our odds of sighting a troll are much better with this location. A quick check-in call to a geophysicist in Reykjavík leaves us assured that it’s unlikely that Hekla – known to Icelanders in the Middle Ages as “The Gateway to Hell” – will chose today to erupt. But if it does blow, we (and the trolls) will have about 25 minutes to make what is normally a 2-3 hour descent before being overtaken by hot ash and rivers of lava.

Many believe that trolls are turned into stone if they stay out long enough to be surprised by the sun. Tolkien, writing in The Hobbit, declared that trolls “must be underground by dawn, or they go back to the stuff of the mountains they are made of, and never move again.”

Not so, says Pilkington. Trolls, when faced with the morning’s rays, merely close their eyes against the brightness, then doze off. Being good sleepers, these naps may last long enough for nature to take its course. The seasons pass and trolls begin to blend quite successfully with the environment as moss and lichen creep over them. 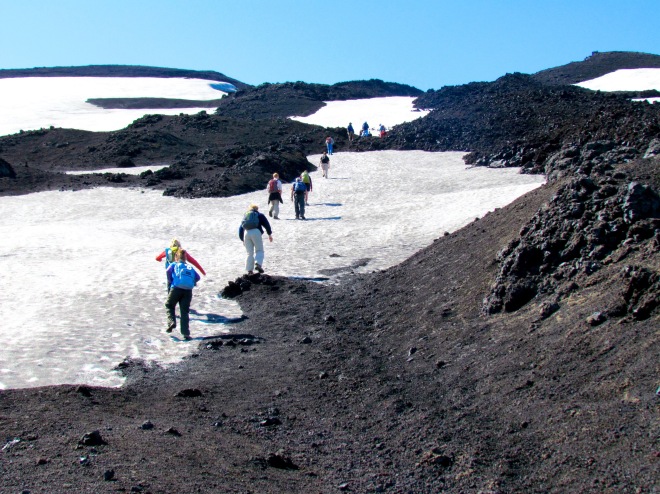 Indeed, Pilkington writes, “it is technically possible for a human to walk over a sleeping troll without ever being aware of its presence.”

I look carefully as we climb through alternating fields of white snow and dark, sharp-edged lava gardens, past a pile of rocks known as Trollwife’s Leap, to the volcano’s warm summit, mindful of what we might be treading on or poking with our poles.

On the way back down, the scene laid out below us is one of beautiful and peaceful emptiness – softly sculpted mountains and wide valleys, a water-colored bas-relief of heathers, moss greens and soft browns. We are quite alone. There is not a single animal, house, farm, building – or, alas, troll – as far as the eye can see in this vast expanse of beginning-of-time nature.

Landmannalaugar is a geothermal undraland, or wonderland, set in the southern section of Iceland’s highlands. With stripes of obsidian, red and yellow rhyolite, green pastures, black sands and sparkling white glaciers, its famous peaks are irresistibly compelling and look good enough to eat –

– a dreamscape of bundt cake-like ridges with a rainbow of colored icings sliding down their sides.

It is July in the land of the midnight sun – the time of year when hiking has almost no daylight limits. And so it isn’t until 11 pm that the sun even begins to think about resting for a few hours, and the mountains become a jewel box of softly glowing golds, greens and roses.

After yet another exhilarating day of geological eye candy and troll-hunting, we join dozens of other hikers soaking aching feet and limbs in the hot streams behind our camp and slowly cook ourselves in the sulphuric steam of Iceland’s geothermal waters.

Bottles of Viking beer in hand, we grin and make the best of the smell, knowing the source of it is actually the subterranean hot springs where trolls like to keep themselves clean by taking long hot spring baths, according to Pilkington…

… at least once a century.

Despite our efforts, we have not actually encountered any trolls, elves, or other whimsical creatures during our hiking adventures here.

But in a country known for having a very temperamental climate, I’ll take nine days of beautiful hiking weather as proof enough of the powers of Iceland’s hidden folk.