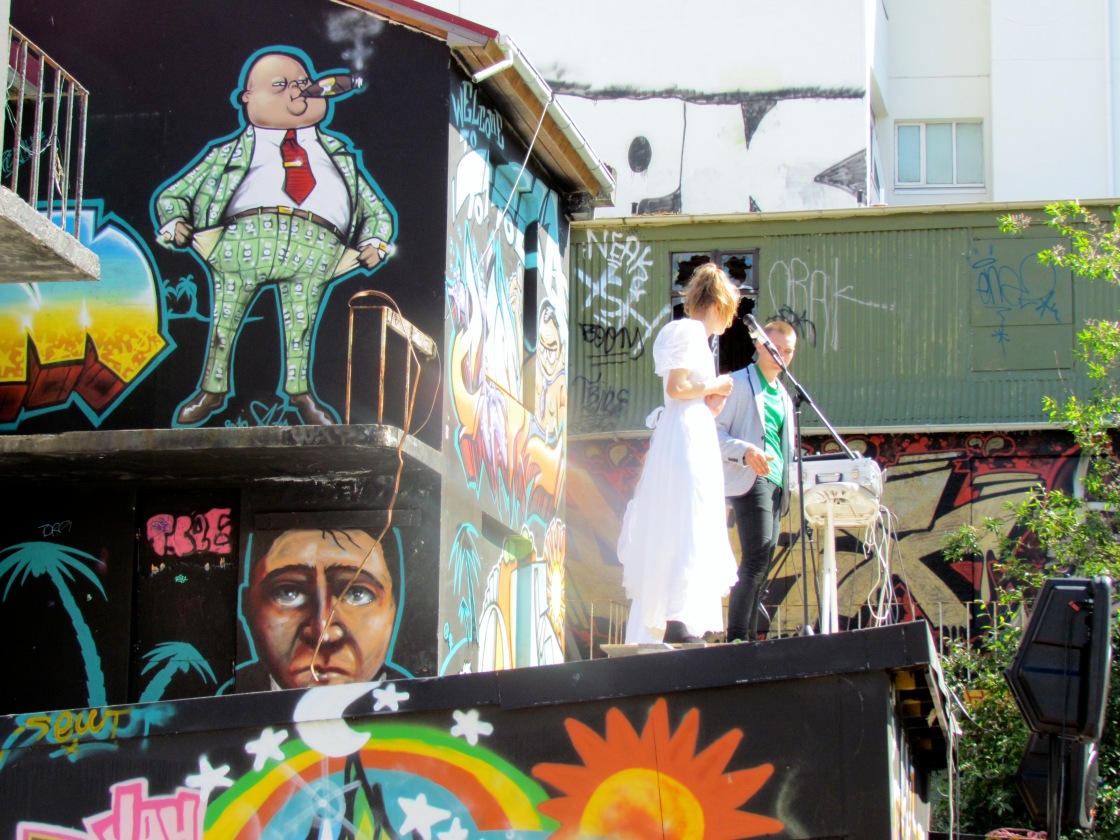 As if in a dream, I’m being pulled into a graffiti-covered alleyway, lured by the sound of electronic music and someone singing….

Curious, I wonder – could this voice belong to Iceland’s most famous musician?

It’s my first day in Reykjavík and I’m walking off the jetlag, checking out the street scene, taking photographs. And for the past ten minutes, I’ve been distracted by this Björk-like siren, listening to her voice reverberate off the walls of the houses and small shops in Iceland’s capital city.

The music gets louder as the colorfully tagged alley yields to a large courtyard where every surface but the scraggly grass has been covered by an explosion of exuberant sprays, flourishes, and cartoons. It is as if the buildings had all offered up their backsides for a frenzy of tattooing, and the resulting urban wallpapering is a feast of artistic expression and eye-candy.

I follow the gaze of the people in the crowd, sitting in small clusters, shielding their eyes from the sun, as they stare up at a young man and two women – one of whom is wearing a simple wedding gown – on the roof of a one-story building.

It’s not Björk and no one’s getting married, but they are the source of the music that has drawn me here – a keyboardist, a clarinet player, and a slim wisp of a blonde who, in her white dress, appears to be levitating as she sings – a phenomenon not entirely surprising in a country often described as ‘surreal.’

The weather is good and mood here is one of happy community.

On the grass in front of me, a gaggle of fashionistas sits in a semi-circle, chatting, laughing, making beaded bracelets and enjoying the sun, half-empty cans of beer beside them.

A wide concrete swath cuts through the middle of the grassy area, going nowhere, an unfinished thought.

And then half a dozen teenage girls in cut-offs, black tights, and red tank tops take over the space, gyrating to the music, promoting something called “Boogie Down Reykjavík”

… while young guys with buzzcuts and backpacks watch their performance from a distance.

Elsewhere in the crowd, small tykes on small bikes tug at their parent’s clothes, impatient to move on.

Over in the corner, a slim brunette in a traditional Icelandic sweater and tight jeans chats on her mobile phone while appearing to study the wall of graffiti before her.

And wafting around us all, like the scent of a come-hither lover, the irresistible smell of warm waffles from a nearby street wagon.

This is Reykjavík’s Heart Garden.